You are here > Media Centre

Our media team can provide comment and spokespeople on a range of sight loss topics, get in touch to see if we can help with your story. 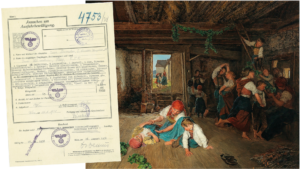 London’s leading sight loss charity is benefiting from a legacy almost 50 years after the benefactor’s death.

The Vision Foundation has found itself at the centre of a poignant and intriguing story of lost art, Nazi persecution and post war politics, thanks to the generosity of a Jewish woman who fled Vienna for London soon after Germany’s annexation of Austria in 1938.

Fifty years after her death valuable artworks held by the German state and on loan to various museums in the country have been reclaimed and sold at auction.

After nearly 100 years, the Greater London Fund for the Blind (GLFB) has launched a new brand and name change to become the Vision Foundation.

To mark this change the charity commissioned a YouGov survey that found most people do not believe a blind person could do some or any of their job. Of the more than 1,800 people polled, only 6 percent of working adults said someone who was blind could do all of their job, while 26 per cent said they could do some of it.