You are here > News > See My Skills: How to land your dream job! > Chris McCausland and Lucy Edwards

Kicking off our conference, journalist Lucy Edwards will be putting your questions to stand-up comedian Chris McCausland. Hear about the highs and lows of Chris’s journey to becoming a successful comedian and his top tips for success. If you want to put your questions to Chris, tweet us using #SeeMySkills.

Chris McCausland is a stand-up comedian and actor from Liverpool. He has been performing stand-up since 2003 and has long been established at the very top of the UK’s comedy circuit. He has appeared three times on the BBC’s flagship stand-up show Live at the Apollo, and the long running comedy panel show Would I Lie To You? He can also regularly be heard on Radio 4, with multiple appearances across shows such as The News Quiz, The Now Show, and Saturday Live.

Chris is blind and lost his sight gradually due to a genetic condition called Retinitis Pigmentosa. He lives with his wife and young daughter in south west London. 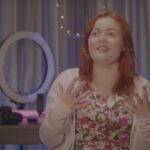 24 March 2013 was the day that changed Lucy’s life forever. At only 17 her world went to black. She had to learn how to navigate her life again. In an instant, she had lost her eyesight but not her determination to make a difference. She took to YouTube and started to upload her experiences and several years later she now has over 500,000 subscribers, racking up over 300 million views and has amassed 1.7 million followers on TikTok. Her regular videos prove that having a disability doesn’t have to hold you back.

Lucy is now a professional journalist and broadcaster and has presented reports for the BBC on TV and radio. In 2019 she became the first-ever blind presenter to host on BBC Radio 1. Through her consultancy work, Lucy constantly promotes disability inclusion and uses her own experiences to shape lasting change and facilitate important discussions within global brands, charities and big media corporations. In October 2021 Lucy became an ambassador for the global haircare giant Pantene.