You are here > News > A visit to ‘The Paradis Files’

The Paradis Files is a brand new chamber opera delving into the life of pianist, composer and touring musician Maria-Theresia von Paradis aka The Blind Enchantress. A whirlwind of a production celebrating Paradis’ successes but also the dark twists that followed her through her life and career; from being subjected to failed attempts at a ‘cure’ to profiteering from her blindness.

As with all Graeae productions, The Paradis Files employs professional Deaf, disabled, blind and partially sighted artists to create and perform an authentic rendition of her life, with the co-writer and lead performer both being partially sighted.

Watch our Instagram reel from ‘The Paradis Files’ World Premiere at the Southbank Centre.

If I asked you to think of a classical music composer from the eighteenth century, you might land on Mozart or Beethoven, as I probably would. Whoever may be called to mind, I doubt the name Maria Theresia Von Paradis would ring many bells. I was recently introduced to this remarkable female composer and performer’s story when I attended The Paradis Files, a newly composed operatic work produced by the Graeae Theatre Company, and part-funded by Vision Foundation.

Maria Theresia Von Paradis (Theresia) was born blind, but she was determined not to let her condition stifle her creative journey and her determination to succeed. As a female living in the eighteenth century she was of course already facing obstacles, but add to this her disability and her perceived ‘difference’ in society and you might wonder how she had the inspiration to keep going. This truly fantastic opera is very much an account of Theresia’s struggles and successes, and really helps to spread that message of ‘anything is possible if you want it to be.’

As well as being Grants Officer at Vision Foundation, I am also a classical musician, and I am passionate about promoting performances that are inclusive and accessible for all. The Paradis Files, is certainly this. From the moment I walked into the foyer, I was greeted by staff who were very willing to help. There were also a variety of features around that really made me feel at the heart of things: there was a touch table, where anybody could feel certain props, and experience some smells that were related to the show. Programmes were available in braille, large print, and electronically via the Graeae website’s access page. These features did not feel at all exclusive to visually impaired people: everyone was making the most of them, and I think they would appeal to people who have never seen an opera before, or to people who simply just want to dive deeper into the world of theatre as an audience member.

This sense of inclusivity was even stronger when the show began. We started by hearing introductions from the cast and band, who described themselves and their costumes, as well as aspects of the onstage set. This was so naturally done, and it felt like a part of the performance rather than something extra. Again, this was great for everybody, regardless of any impairments. It really broke the ice and created a relaxed atmosphere. Audio description was in fact integrated into the whole performance, and not via the usual route of a headset because the libretto itself contained the audio description. There were also BSL interpreters, as well as screens where people could read the text. It was just a truly accessible and enjoyable experience, that should certainly pave the way for providing further accessible theatre.

The music itself was a real sonic adventure: we could hear glimmers of Mozart, but also some really contemporary sounds. The singers were exquisite, and each voice was so individual and really stood out to me. The themes of the show were so relevant, even though it was set all those years ago.

Theresia really wanted to challenge societal representations of sight-loss: whilst her mother was desperately seeking a cure, Theresia pushed against this and insisted that ‘cure’ was the wrong word. Her blindness was a part of her and her identity, and she saw it not as a problem that needed correcting. She was independent, and transcended barriers and shattered assumptions by becoming a highly successful touring concert pianist. I think this was extremely inspiring, and her story should be more widely circulated. She is the perfect example of resilience, and shows that if you want to achieve something, you should just go for it!

The Paradis Files is touring the UK until 12 May 2022, you can find the tour dates and book your ticket here. 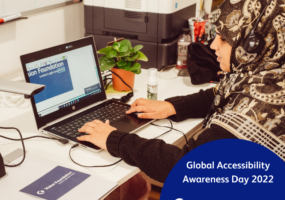 Global Accessibility Awareness Day (GAAD) is the annual awareness day focusing on digital access and inclusion for disabled people around the world. It takes place on the third Thursday of May each year. Everyone deserves a first-rate digital experience on... 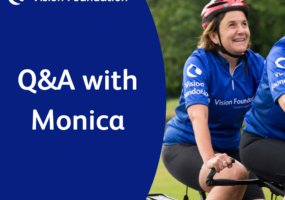 “It gave me a tingly, emotional feeling that was unforgettable” Vision Foundation’s very own cycling enthusiast, Monica Smith shares some pearls of wisdom about her RideLondon triumph in 2015.   [caption id="attachment_10355" align="alignnone" width="902"] Monica (left) and HRH The Countess...